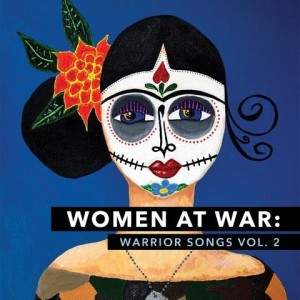 The CD Release event for Women at War: Warrior Songs Vol. 2 will take place at the High Noon Saloon on November 10 with doors at noon and music until 5pm. The cover charge includes a  copy of the CD or it can be purchased here. You can also make a donation to Warrior Songs through their website. 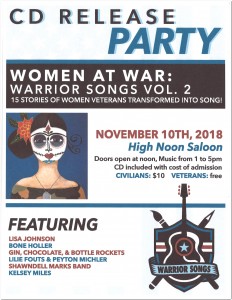 When Jason Moon returned home from combat in Iraq in 2004, his battle was just beginning. Originally diagnosed with depression and insomnia, it wasn’t until 2008 that he was diagnosed with PTSD, after a suicide attempt. Moon had an interest in music and songwriting and embarked on a mission to help himself and his fellow veterans. He founded Warrior Songs, a nonprofit organization “committed to facilitating healing through creative arts.” The group’s mission is “to assist veterans with more fully understanding and integrating all aspects of the military experience by transforming their trauma and struggle into an art form which both inspires ad is life-affirming, thus motivating their continued healing.”

This is the second volume of music based on the testimony of combat veterans. Vol. 2 was recorded by women and groups featuring women, both local and from other parts of the country (If You Have To Ask – Warrior Songs, Vol. 1 was released in 2016 and you can read the review here). Warrior Songs collects stories for its Story to Song program at workshops, through personal encounters on outreach excursions and from accounts sent to their website. The storywriters are paired with the participating musicians and the songs are only recorded after the veteran approves of the finished piece. This second volume is focused on female veterans and some of the experiences of these women are horrific. Volume 3 is already in the works and will focus on Vietnam-era veterans.

The tone of these songs centers on the disrespect, ignorance, condescension and outright abuse women in uniform endure, above and beyond the scars of the battlefield, but also the strength and courage that fuels their survival. Nowhere is this more apparent than on “You’re the Enemy” by Colorado’s Emily Yates, a battle cry out of our weird, backward world of having to defend sexual assault survivors. Her narrative of the song on her website dedicates the song to “all survivors of MST (Military Sexual Trauma), especially those whose attackers have not had consequences.” Yates does not mince words: “They say that you’re my battle buddy / They say that you’re my friend / That I’ll never have to make you answer / To the business end / Of this weapon I was issued / To give terrorists their due / But what if the terrorist is you?” The track concludes with a sound of unknown origin that simulates a terrifying scream.

A similar testimonial is relayed in “Sisters Turning” by Portland, Maine’s Anni Clark with lyrics by veteran Suzanne Rancourt. The words tell the tale of her rape by a Navy man. Musically the song sizzles and is very well-produced, the violin adds levity and the drums are sharp. The vocals are powerful and reminiscent of Melissa Etheridge.

Madison music fans will be pleased to find a new song from the apparently defunct Sexy Ester. “Don’t Ask” was produced at Megatone by Paul Schluter in August. It’s a powerful rocker with singer Lyndsay Evans reaching into the stratosphere for the last note. Other local contributors include Kelsey Miles who starts the disc off with an impassioned and soulful composition, “Sacrifice Ignored;” a duo pairing of Beth Kille and Jenna Joanis who rock out on “Save Your Life;” and Anna Wang’s solo electropop-infused “Warrior Wings.” Singer-songwriter Lisa Johnson takes an excerpt from a Navy veteran’s book, The Boulders in My Life That Shaped My Journey and delivers  the folky “Broken Free,” with violin and keyboard arrangements courtesy of Blaine McQuinn and Jake Johnson, respectively. All these songs echo the CD’s themes. Shawndell Marks contributes one of the disc’s best tracks, the melancholy “Sister Sarge,” performed with style and high artistry. Dan Kennedy adds tasteful and haunting guitar lines. This is a complex and emotional song, showcasing Marks’ supreme command of intonation and delivery.

Just a little further from home, Appleton Rock School chips in with “Where is Your Heart,” written by Jason Moon and Kyle Rightly and sung by Peyton Michler (age 15) with acoustic guitar by Lilie Fouts (age 13). The vocals in particular are notable no matter what the singer’s age. A folk-rock feel from an assembled band that may well include other young players. Another young singer-songwriter by the name of Joanne Powell turns in an impressive ballad with “Things You’ll Never Be,” recorded in Wauwatosa. Also recorded in Wauwatosa is “Star in the Dark” by Lindsay Jensen and Kevin Welsh. Lyrics are taken from the writings of Sonja St. John who also contributes violin. Rounding out the Wisconsin contributions on the 15-song CD is Appleton’s Copper Box with “You Know Me.” An acoustic ballad, this self-produced effort has a memorable melody line though it suffers from a bit of timing issues on the acoustic guitars, which gets resolved when the drums enter midway. Michelle Jerabek’s alto vocal is strong and passionately sung.

Other selections include “I’m Your Voice” by Nasheville’s Jenny Anne. Another self-produced effort, it also has some timing issues but the story is compelling, written with Army veteran Carissa DiPietro whose daughter was killed in 2001. Another Nashville artist, Kristen Ford, contributes “Keep it to Myself,” a mid-tempo song that benefits from a string arrangement and a classy slide guitar solo. Ford’s vocal is a bit raspy, slightly reminiscent of Concrete Blond’s Johnette Napolitano. The album closes on an upbeat note of strength and conviction with the infectious R&B groove of Atlanta’s Connie Baptiste and Dora Chambers. The song is “Always on Top,” a celebration of victory and survival.

Jason Moon deserves a lot of credit, not just for what he has done and the tenacity and commitment required to undertake the Warrior Songs effort, but also for who he is. This is a healing journey that he’s now brought to so many others and that is the very spirit of what it means not just to be an American, but to be human. There’s only one way out of this mess our country has made for itself and, like a war zone, it requires compassion, leadership and courage. Warrior Songs Vol. 2 helps us appreciate the struggle and endurance of the female soldier but also helps each of us relate to our own daily battlefields, injecting a shot of hope along the way. 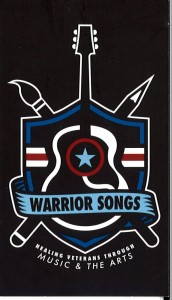