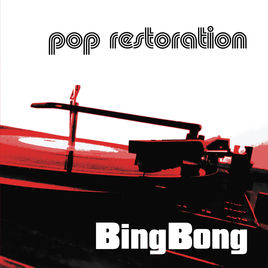 Pop Restoration is intended to be heard on vinyl and is available at Mad City Music Exchange. Digital Download is also available at CD Baby.

The debate over vinyl vs. digital has been raging for years, as much an argument of convenience vs. authenticity as it is about audio purity.  Whatever side of the fence you’re on, BingBong make it abundantly clear where they stand, releasing their debut as a vinyl 12-inch LP. It seems weird that an explanation of what that means should follow. The band itself puts a statement in the liner notes to “not forget to turn the record over; there’s music on the other side, too.” They haven’t completely abandoned the throng of listeners that employ compressed files played by inadequate equipment and heard through shitty earbuds, however, making the album available as a digital download as well. For those in the middle, CDs or lossless files played through higher quality systems and/or upper-end headphones – foregoing the scratches, pops, crackles, skips, wow and flutter, not to mention the bulkiness of vinyl – will easily suffice. Suffice it to say that BingBong did this one old school, recording on analog equipment to 1” tape, mixing to ¼” analog tape and then cutting the master by lathe. The pairing with Williamson Magnetic is a match made in heaven then. With Mark Haines engineering with help from Tessa Echeverria, the respected studio gets a golden opportunity to state its analog case with a high-profile band such as BingBong, which is comprised of veterans of Madison music including Pam Barrett of Motor Primitives fame, guitarist Danny Hicks (Fauxtons), bassist Julie Kiland and drummer Brian Bentley (Fauxtons).

It’s important to state that Pop Restoration was recorded live as well. That is, all four players in the same room attempting to capture magic in a bottle with only minimal overdubbing. Little fluctuations in tempo are human elements that no modern-day producer would allow, reducing the performers to mechanical imitations of themselves by employing such perversions as tempo correction, drop-ins and (God, please NO!) auto-tuning vocals.

The album opens with “Tomorrow,” which was moved from the last song to the first song on the digital release. It works as an opening salvo; a finely-crafted pop tune that moves effortlessly through its mid-section departures. Hicks’ surf-y guitar lick melds late sixties pop to Eighties vocal styles. It’s impossible to not hear Chrissie Hynde of the Pretenders in Barrett’s vocals here, especially when she overdubs a vocal harmony. “It’s Complicated” was released as a single in late December, before the album’s release in February.  It’s refreshing to hear Hicks use chorus effects without layers of plastered-on instrumentation blanketing all the nuances. The same can be said of the tremolo employed on “Tangled,” which harkens back to Satanic Majesty’s Request-era Rolling Stones, Barrett’s rhythm chunking along in Keith Richards fashion. The lead guitar is allowed to stretch in parts which makes this the longest cut on the ten-song album at just under five minutes. The tremolo guitar returns on “You’re My Desire,” a “Not You’re Stepping Stone” progression leading to a catchy chorus. It’s a treat to listen to the guitar interplay on headphones, the two being separated in the left and right channels.

“Many Years” changes things up nicely at the album’s midpoint, a rolling ballad with some country rock overtones and a nice sentimental vocal from Barret. The Hicks/Barrett composition “Spitfire Lover” has a really cool guitar part, a little chromatic and nicely constructed, the rhythm section especially tight in the songs frequent stops-and-starts. Hicks’ “Sugar and Spice” is straight-up rock and roll again melding sixties psych-rock with high-energy, late-seventies punk. “It’s a Crime,” makes a fine closer, too, instead of taking the penultimate position on the vinyl release. There’s a finality to it, a summation. It’s a rocker with a fast tempo and ringing guitar from Hicks, leaving the listener wanting more.

And hear more you can on the digital release as there are three bonus tracks. These songs fit in well with the rest of Pop Restoration but one of the limits of vinyl is the amount of space and these extra tracks bring the running time to nearly fifty-five minutes, too much for vinyl to accommodate. “Nothing You Need” is immediately reminiscent of Spooner, cool, surf-y guitar and new-wave rock attitude. Kind of a shame this got left off the vinyl and this one likely kicks ass live. “Rev it Up” completes the digital release with an intro recalling the Stones’ “Missing You” that leads into a funky Pretenders-like groove.

The authenticity of BingBong doesn’t end with the recording process. What you hear on vinyl is mostly what you’re going to hear live, perhaps less a vocal harmony here and there. If you have producer’s ears your mind will want to imagine further enhancements but the unadorned nature of Pop Restoration is refreshing. It’s just great to hear Barrett and Hicks pressing on even if this debut comes a full five years into the life of BingBong the band. The entire project just oozes “Madison” and as such slots right into what gives our lucky city its vitality. 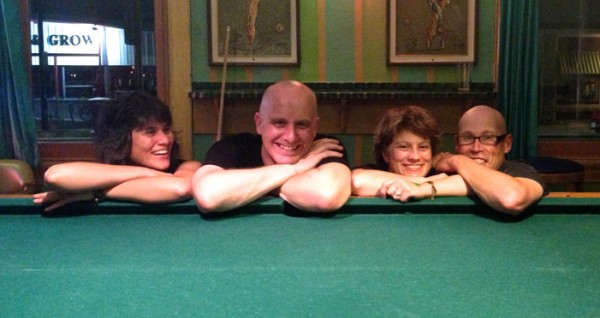