The other day I revisited Elton John’s Goodbye Yellow Brick Road album, one that was sure to bring back some memories for me. The version I have is a 40th Anniversary remaster. If you know anything about CD reissues you will know that these things often come loaded with extra tracks, video, expanded liner notes and photos or all of the above. Some are better than others. Some are pricier than others. I’m a particular sucker for these, especially for the rare songs and video.

In the case of Goodbye Yellow Brick Road they appear to have made a fatal flaw. Why they decided to shamelessly promote the careers of questionable up-and-comers by having them (badly) cover several of these songs is a complete mystery – or maybe not. After all, CD sales are nearing extinction and if Sam Sheeran fans latch on to this reissue to get his track, so be it, I guess. Also included on the bonus CD were several cuts from a Hammersmith Odeon concert (in London – since renamed the Apollo) from 1973 that I already have on a bootleg. The “Super Deluxe” edition is 5 discs one of which is DVD with Sir Elton and Bernie Taupin reminiscing. It also includes the full Hammersmith Odeon concert on two discs. To confuse things even more there is a 30th anniversary reissue that has different bonus tracks that are actually more collectible. This is typical of reissues and how they keep you coming back, purchasing new editions of what is essentially the same album. Save the cash on the 40th Anniversary Edition though and check it out at the library.

The 40th Anniversary Edition liner notes, which explained that the album was originally intended to be recorded in Jamaica, were of great interest but these accounts can be read elsewhere. John found the conditions so deplorable that the project was scrapped. Meanwhile, he and lyricist Bernie Taupin continued to write. Back to Europe they went, winding up in France and recording what would be John’s second-biggest seller, next to his Greatest Hits album. They had so much good stuff it became a double LP and, as such, is one of the biggest-selling double albums in history. But get this – they recorded the whole thing in just seventeen days. Now that’s a band at the peak of their prowess, which Elton John’s band was in 1973.

What also sparked my interest was the fact that this album was referred to as an eight-time platinum album. Platinum in the US, according to the Recording Industry Association of America (RIAA) standards is sales of a million. RIAA certifications are based on units shipped less returns. So when you look at these figures it can be confusing to make sense of “certified” sales versus “claimed” sales. In 1991 Nielsen Soundscan was introduced which electronically tracked album sales with much more accuracy. Soundscan tracks sales in the US and Canada and feeds the Billboard charts. Worldwide sales of Goodbye Yellow Brick Road are claimed to be 30 million.

I was glancing at the record charts and noticed Tom Petty’s new album went #1 in its first week – but there were only 131,000 units sold. Really? Furthermore, the previous week’s #1 was 5 Seconds of Summer who had sold a bit more respectable 259,000 copies of their debut. The following week, however, they only sold 54,000 copies – enough to drop it to #4. Looks like their fame may be about as long as their summer! If you follow the charts at all you’ll notice how briefly these recordings stay listed now. We’re talking major artists, too, like Springsteen and, yes, Tom Petty. They fall off the charts in a matter of a few quick weeks. This all got me to wondering what some of the biggest albums have sold.

Michael Jackson holds the record for Thriller at 72.4 million. Next is Pink Floyd’s Dark Side of the Moon at 41.8 million. Third is the Grease soundtrack at 40.4 million. Goodbye Yellow Brick Road was listed at #171 with 13.2 million sold according to Billboard Magazine’s 300 Best Selling Albums. If the artist were to get the frequently-cited $2 per recording sold, you can see how this adds up. And since this is Billboard we’re talking only US and Canada.

Since 1991 there have been 21 albums that sold 10 million (RIAA certified Diamond level) or more. Adele’s 21 is the most recent in 2011. You have to go all the way back to 2002 to the next, both Eminem’s Marshall Mathers LP and Norah Jones’s Come Away with Me. The RIAA recently crowned Katy Perry the Top Certified Digital Artist and also gave Justin Timberlake props as the best-selling artist of 2013 with sales of his 20/20 Experience recording topping 8 million.

The Beatles remain the biggest-selling artist of all time worldwide at 600 million (259 million RIAA certified) with Elvis, Michael Jackson, Madonna and Elton John rounding out the top five. Drawing conclusions from all the different sources is difficult at best, however.

Though the CD has been all but declared dead – as well as all forms of physical product – they still account for 35% of revenues. Since Napster’s introduction in 1999 CD sales have slumped considerably, from $18 billion to roughly $2 billion in 2013.

What this all means is anyone’s guess. The balls are still up in the air. But you can bet that even Elton John is in no immediate danger of losing his position at #171. Things have shifted to the song download from the album sale; that much is clear. Lossless formats make digital downloads more attractive as well. Supporting an artist as they grow and develop just doesn’t happen anymore at the label level nor the fan level. People mostly just want to get their rocks off, they don’t want to commit to a relationship.

And what does this mean for artists at our local level? Many that I speak to tell me they make as much or more off of their merchandise as they do for many of their performances. The more creative they are and the more industrious they are – screen printing their own shirts, for example – the more they profit from their merch. Often the CD-release party is an artist’s biggest event for a year or longer, depending on how prolific they are at getting songs written, recorded and released. Kickstarter and other crowdfunding projects have proven immensely helpful in funding recording projects. So for the time being the CD is still important to the local artist, perhaps as important as the gig itself.

As supporters and consumers of local artists’ performances and music it has to be remembered how difficult it is to keep the ball rolling. Next time you see local music, come prepared to buy some merch if you’re impressed. It could be the difference that keeps that artist going just a little longer. And if you’re STILL going to bitch about a measly $5 cover you should probably just stay home and play your CDs. 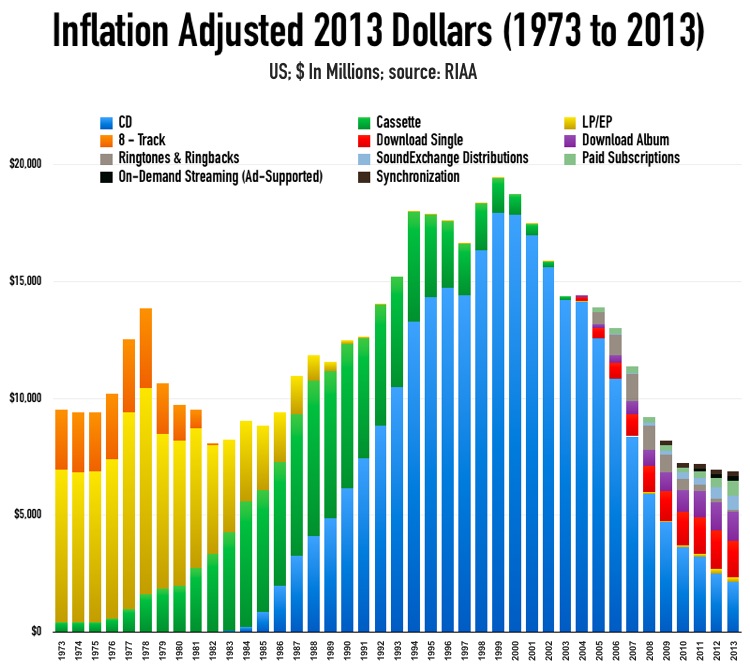