They mix a healthy dose of juvenile humor with horror-show personas and balance it all out with a loud, ludicrous sound. There are no words to the music, and no message, but the images of masked madmen in 80s glam-rock t-shirts give the whole concoction some context. Add clips of Evel Knieval and 60s drag-racing movies and the picture becomes even clearer.

Knuckel Drager, through their gigantic, grating tone and lyric-less, frenetically paced surf-laced metal, are trying to depict their exuberant angst. Their dedication to the slick, greaser image of The Outsiders melds with the tonal effect of a Russ Meyer movie soundtrack. 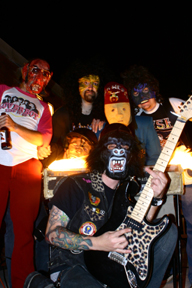 They’re often characterized as surf-rock, which is a very easy mistake to make. The Hawaiian-inspired rhythm and the Dick Dale guitar flavor exude a surf feel while the Farfisa adds that classic electric organ sound. But the possession of an unruly metal edge makes them far heavier and more caustic than anything ever played on a soundtrack to an Annette Funicello flick.

“The roots are there” adds drummer Ruffie Colada.

“Yeah, the roots are there,” Von Loser agrees, “and the reverb is there, but I think I’m the only one that still plays surf rock.”

“Well, I don’t think there’s too much double-bass work in surf rock,” states Colada. “And Drager has some double-bass action going on. I like ‘Hawaiian Metal.’”

The slamming drums blend into the huge, distorted, layered guitar tones and the intense results are screamingly metal. They didn’t start out this way. Ten years ago this month, brothers El Diablo (guitar) and Max Wedge (keyboards) created this band along with guitarist Major Rager and his brother, bassist Shaftman (who has since left the band), not to mention the legendary Roddy Milkbone. They had one lofty and utterly achievable goal.

“When we first started this band, we just wanted to headline a show at O’Cayz on a Saturday night,” remembers Rager. “We did that in the first few months, so we didn’t really have anywhere to go after that.”

In those early days, the heady dose of surf that went into their rock was a much more dominant feature than it is now. But back then, in their infancy, they also made the decision to create the image of this band that remains today.

“They opened up for themselves,” explains Von Loser. “It was Inspector 12’s last show. That’s the band Major Rager and those guys were in before. So they put the masks on to open up for themselves. They were dicking around in their practice spot and that was that… it stuck.”

From Von Loser’s gorilla mug to the satanic visage of El Diablo to the slack-jawed horror face of bassist Kap’t Korloin, the anonymity that comes with donning a mask affords them a distinct personality and presence that mere flesh can’t produce. And when these masked monsters don Loverboy and Winger t-shirts in some mock reverence to soulless schlock rock, the whole scene stays just on the cool side of silly and completely focused on pushing the whole damn thing right down your throat.

But what really makes an impact is the sound. Three guitars, each churning out a defined element into the mix, pummel the crowd.

“I’m the surf part, the clean reverb, the Fender sound,” Von Loser explains. “I try to get it as vintage- sounding as possible. Major Rager’s a little more over-the-top metal. And El Diablo’s the secret weapon. That boy ain’t right. You never know what you’re going to get until he plays it. That’s El D. You can do a lot of really cool stuff with three guitars so we try to take advantage of that. It’s just a huge-ass sound.”

With a sound quickly evolving into some amalgam of metal and surf, an image that quickly became a defining element of the band, and a revved-up, raucous stage show, Knuckel Drager’s hotrod rock made them a unique fixture in Madison’s music scene. The fifties-throwback crowd, with their tattoos, leather and James Dean aesthetic, latched onto this band and gave them a scene rather than a typical fan base.

“I don’t think anybody really likes us,” Von Loser admits. “We don’t have any friends.”

“But we have talent,” Colada interjects. 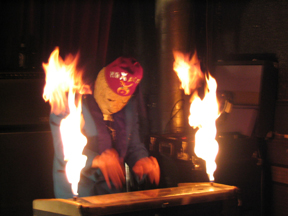 That talent has made them fans and friends, despite Von Loser’s pessimistic view of his band’s success.With rumors of working with Jello Biafra always swirling behind the scenes and with an ever-growing reputation throughout the country, Knuckel Drager has managed to parlay their knack for showmanship into performances that leave an indelible impression on their audiences. When a crowd sees that organ burst into flames as weird, vintage movie clips swirl around the room and a triple attack of strings hits them in the face, they don’t soon forget the band behind the staged mayhem. And every time Knuckel Drager heads back through that town, people return for more.

This innate sense of how to entertain the masses has resulted in an extraordinary opportunity to tour some of the best clubs in the country, from the Knitting Factory in L.A. to the Crocodile Café in Seattle, opening for the queen of punk rock herself, Exene Cervenka, on a national tour in November and December of this year.

“We knew her husband-to-be,” adds Von Loser. “We played down there with his band a couple times – he’s in another surf band.”

Not only will the band be opening for Cervenka, but a few members will actually be performing with her band on this tour.

“We’re going to be the Original Sinners for Exene,” Colada says with pride. “So we’ll do double duty. One set in the mask and one set with her. Major Rager, Kap’t Korloin and I will be her backing band. It’s going to be pretty bad-ass to back Exene.” 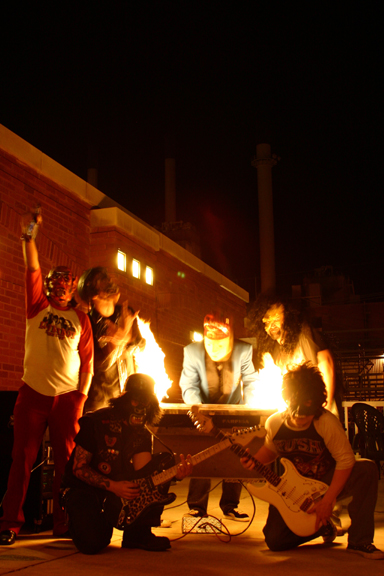 The whole band seems to be glowing over the good fortune that has landed in their collective lap.Two months on a national tour with guaranteed payment and hotel rooms every night is a dream come true, and backing a legend as she tears into rooms full of diehard fans is just icing on the cake.While most bands hope they don’t lose everything when they hit the road, after receiving a note from his landlord on the day of our interview, Von Loser expects to actually be able to pay rent when he gets home. If the band survives the tour, that is. If Knuckel Drager’s past experiences on the road are any indication, that may be difficult to guarantee.

“It’s usually a bad scene,” Colada concedes. “But what happens on the road stays on the road.”

“I almost died,” says Von Loser.“That whole partying-like-a-rock-star thing isn’t all it’s cracked up to be. When you’re drinking off a hangover off every day, it builds up. After two weeks of that, you’re shivering in the van with cold sweats. I don’t think I had blood at that time… it was all booze.”

“We have big plans for this tour, to not be that way,” Coloda states.

For a band that hasn’t made any big plans in a decade, this could be an important tour. If they come off the road intact, and survive the onslaught of wine, women and song that is Knuckel Drager on the road, then they can reap the rewards. A national tour opening for a punk icon will give them a host of potential new fans all over the country who are dedicated to their surf-core sound, their flaming finesse and their outrageous image.

But as long as they keep those masks plastered to their faces and the Hawaiian metal flowing from their amps, they’ve got nothing to worry about. These self-professed slackers who have had notoriety, opportunity, and now a national tour fall into place have obviously been born under a lucky sign. If they keep clawing at the surf-rock genre with metallic fingers and maniacal performances, there’s no telling where they can go from here. 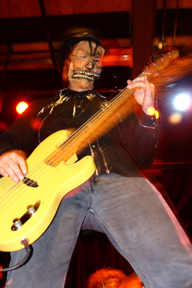 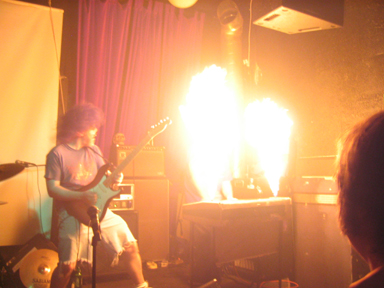 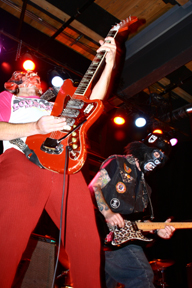 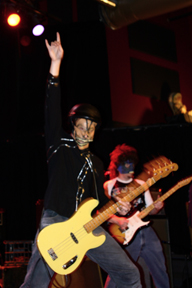 Tags: Cover StoryKnuckel Drager
← Josh Harty: Working Out a Long List of Lies Planet of 9 Looks to Conquer Other Worlds →